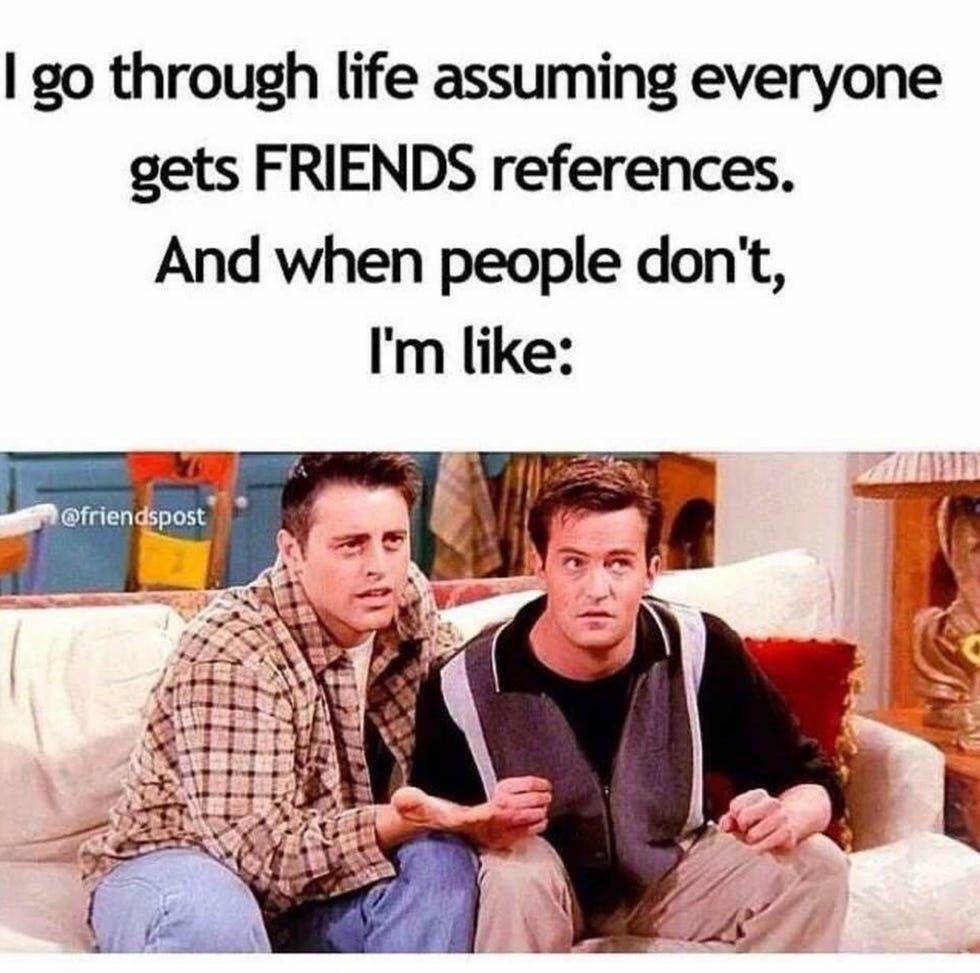 Besides its iconic cast and unforgettable storylines, Friends is famous for how quotable it is. The show introduced multiple lines that became part of pop culture, including Joey’s catchphrase, “How you doin’?” and Ross’ pitiful justification for cheating on Rachel, “We were on a break!”

Fans of the show enjoy quoting these lines in casual conversations, forgetting not everyone might get their references. This meme perfectly captures that feeling of confusion when someone doesn’t understand a Friends reference and Chandler and Joey’s reactions are incredibly accurate.

The One With Poor Gunther 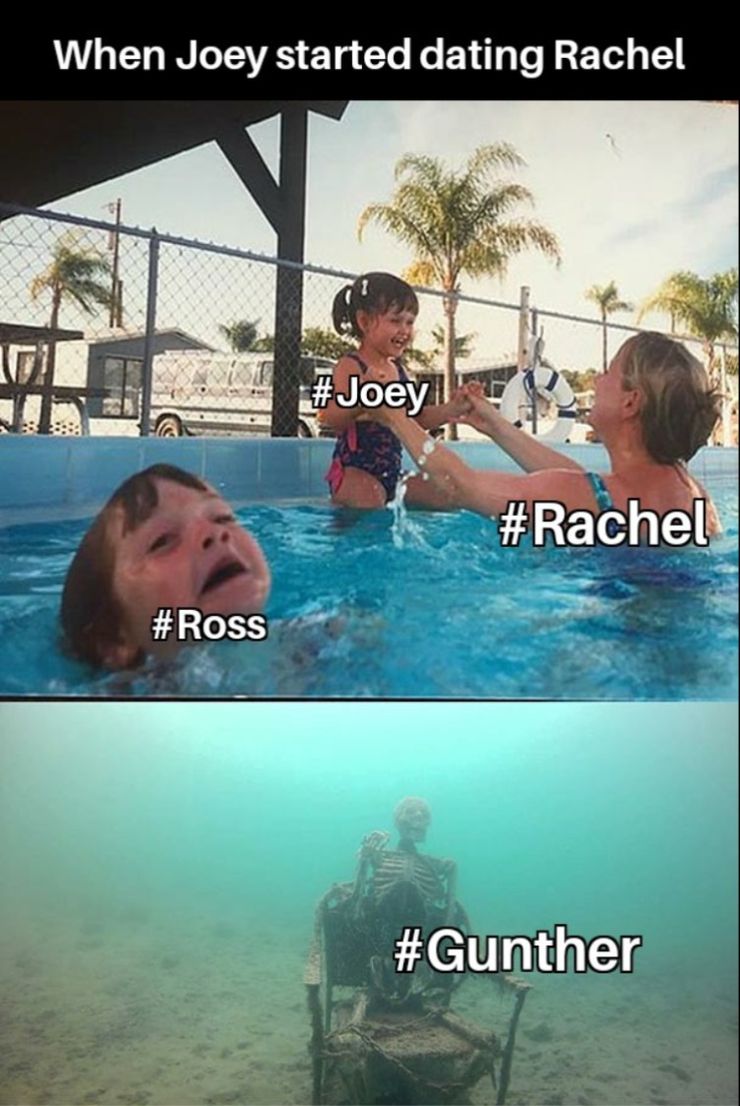 Gunther is Central Perk’s manager who harbors an intense, slightly creepy, and long-standing crush on Rachel. He confesses his feelings before she leaves for Paris, but she lets him down gently. Still, many fans believe Rachel and Gunther should’ve ended up together, although the idea isn’t very popular.

Throughout the show, Rachel has several love interests, but Joey and Ross are the most significant. This meme is the ideal representation of the Ross-Rachel-Joey love triangle, while also doing justice to the treatment poor Gunther received throughout the show’s 10 seasons.

The One With Ichiban – Lipstick For Men 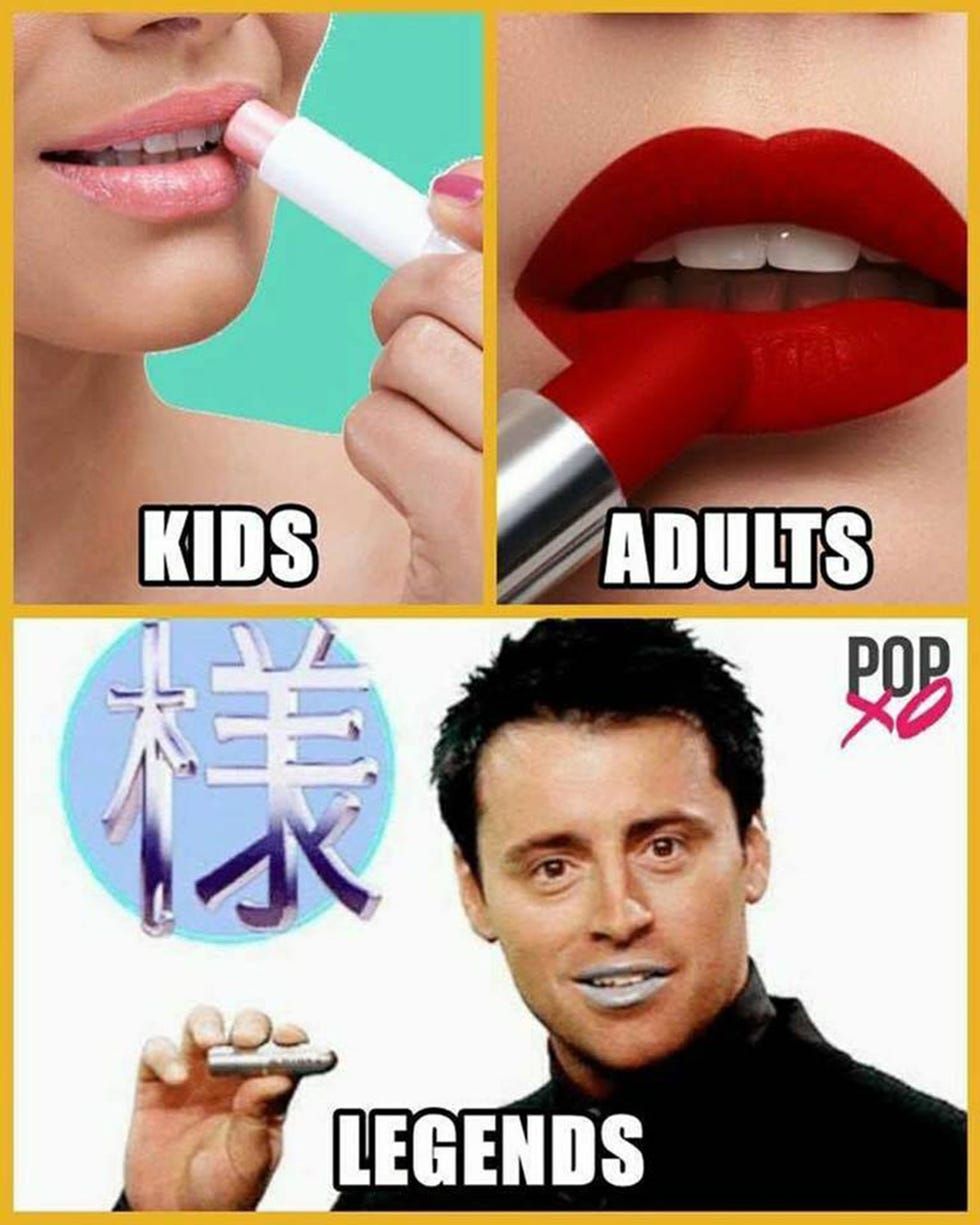 Joey’s acting career goes through a series of ups and downs. Because he has trouble getting acting roles, Joey spends most of Friends working temp jobs, like being a waiter and then a sperm donor. When he does get acting gigs, it’s usually for commercials or obscure plays.

One of Joey’s most famous commercials is a Japanese ad for a male lipstick called Ichiban. The commercial features him playing guitar while wearing a neon-blue shade of lipstick. This meme celebrates Ichiban and Joey, cementing the commercial as one of the show’s funniest and most unforgettable moments.

The One With Ross Geller – Three Divorces 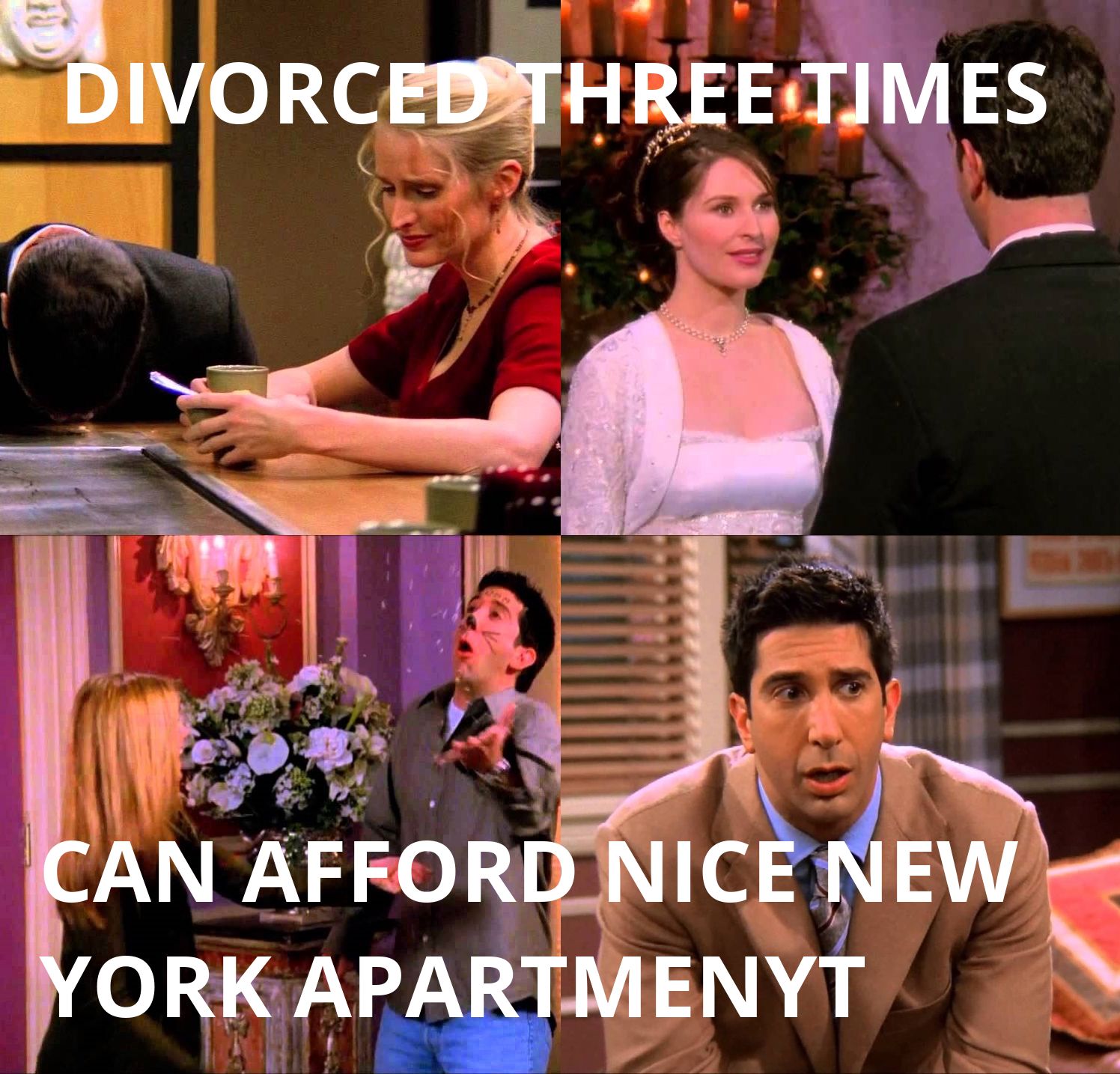 Ross’ love life is one of Friends‘ recurring jokes. He gets married and divorced three times throughout the show and never seems to learn anything about his previous romantic failures. Friends often put Ross in sticky situations, but his divorces from Emily and Rachel were arguably his most notorious blunders.

The main character’s financial lives never made any sense, but Ross’ comfortable lifestyle was particularly illogical considering his three divorces. It’s unlikely he paid Rachel or Emily any money, but he did pay child support to Carol and did so with a museum employee’s salary. He later becomes a tenured professor, but his finances remained dubious, and this meme accurately portrays that.

The One Where Phoebe Spoke The Truth 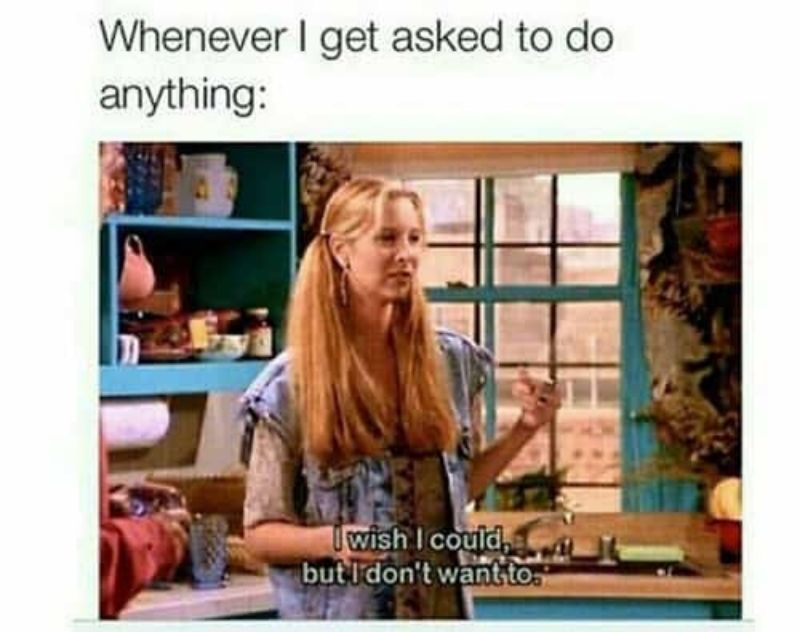 Friends had several hilarious characters, but none were as funny or memorable as Phoebe Buffay. The singer/masseuse was the show’s heart, delivering some of the most iconic lines and starring in the best storylines.

Phoebe was famous for her bold and no-nonsense personality, which could often make her seem slightly mean. However, her brutal honesty was refreshing and appreciated. This meme perfectly explains why Phoebe was so relatable and likable. The blonde said everything fans thought, and she was never afraid or ashamed of telling it like it was. Most fans feel that the world would be better if more people were more like Phoebe. 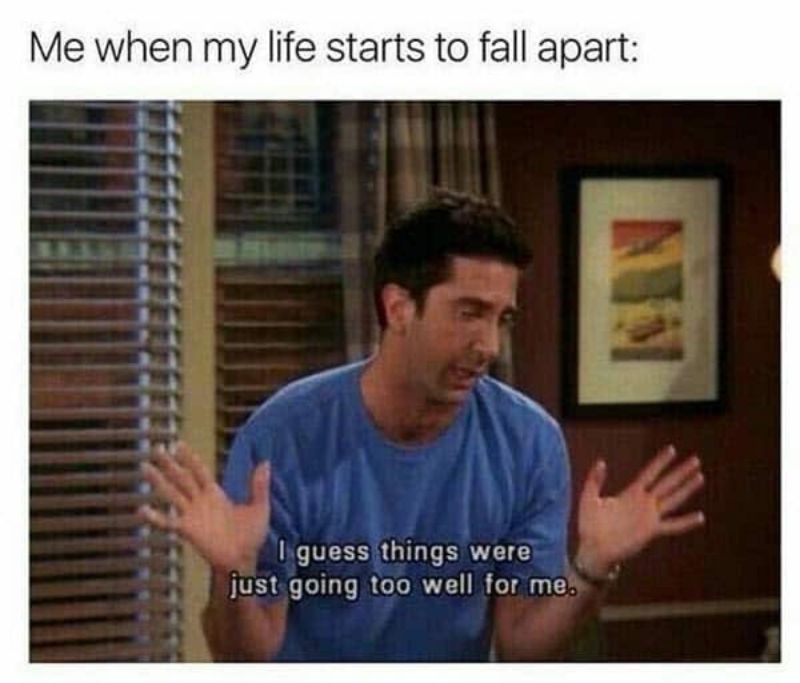 One of the many reasons fans love Friends so much is how sympathetic and relatable it is. Indeed, the show did a wonderful job of capturing how erratic and unpredictable life was. One day the characters were doing great, and the next, they were out of luck.

This meme, which uses a memorable scene of Ross complaining after a shampoo bottle exploded inside his bag, is another reminder that Friends was all about the hardships of growing up. Things might get complicated sometimes, but no problem lasts forever, especially with loyal friends to make things easier.

The One Where They Were On A Break 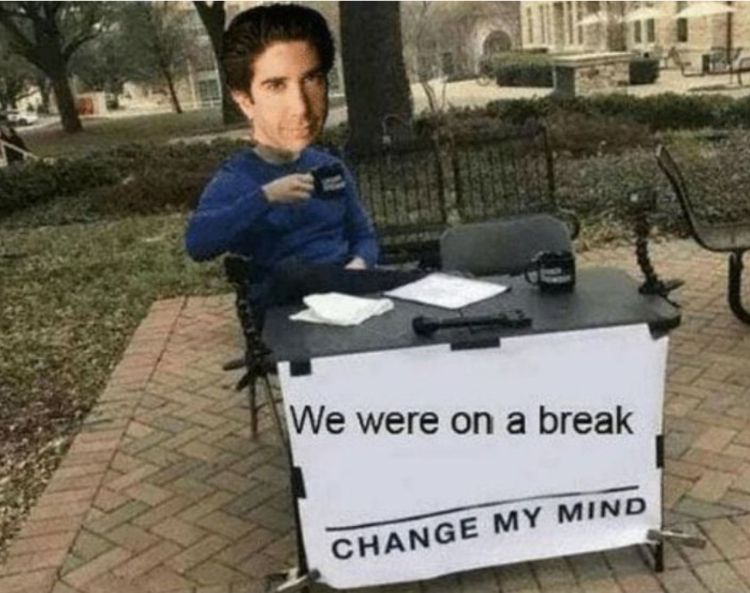 “We were on a break!” has to be one of the most iconic quotes from Friends. The line divided audiences into team Ross and team Rachel; many believed they were indeed separated, so Ross’s actions didn’t count as cheating.

Whatever fans believe, the fact remains that Ross never stopped believing her was right. He was arguably the most stubborn and close-minded of the six characters, so his behavior makes sense. This meme is the perfect illustration of Ross’ mindset. Indeed, he spends the remainder of the show defending his actions, even when everyone else begs him to let them go.

The One With The Clean Freak 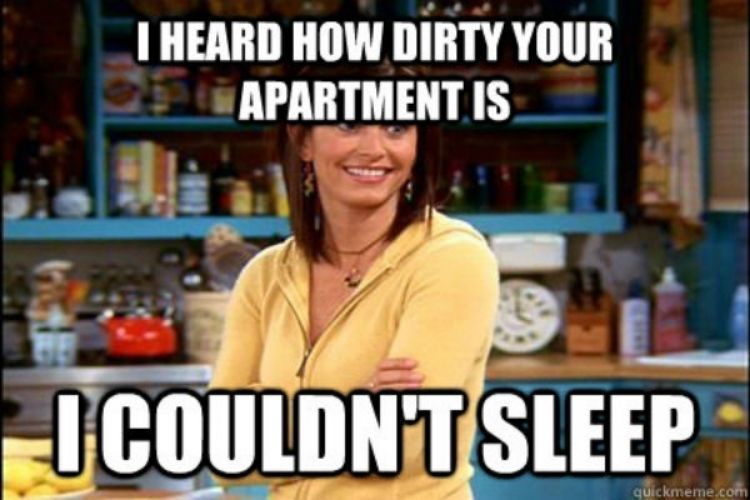 Monica Geller is one of the most competitive characters on television. She’s a classic type-A chef who loves being in control and keeping things clean and her obsession with cleanliness leads her to do some truly unhinged things, like going to her brother’s ex-girlfriend’s apartment in the middle of the night to clean it. Monica also mentions there was once a dirty car parked on the street that made her so upset she bought car cleaning supplies to wash it.

This meme is both a celebration and a gentle jab at Monica. Many fans related to her need to have everything around her clean. After all, there’s nothing worse than arriving late from a long day’s work and finding a dirty apartment.

The One With The Chick & The Duck 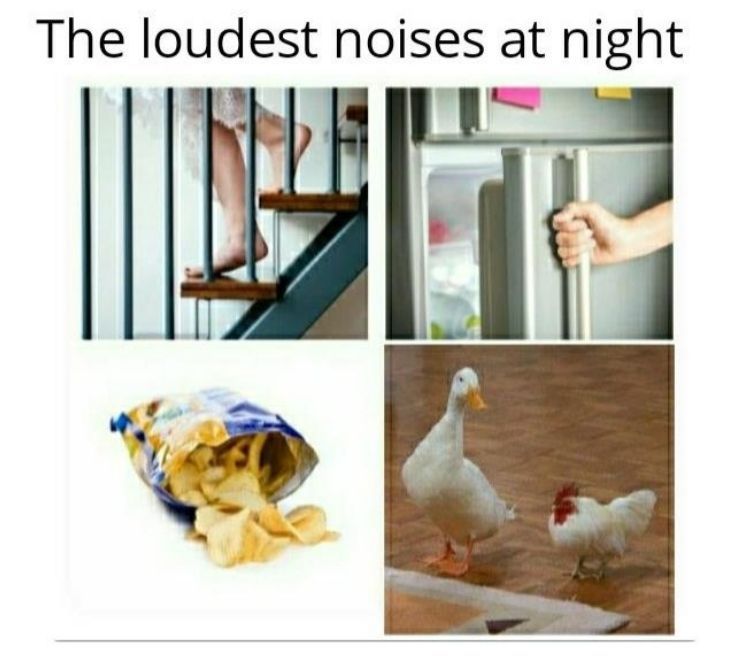 Joey and Chandler had two very unconventional mascots during the show’s early seasons. The chick and the duck made things hard for them and their neighbors. In fact, they’re one of the main reasons why Rachel and Monica lose their apartment during season 4.

The show later hints that Chandler put the animals to sleep and lied to Joey about it, telling him the chick and the duck went to a special farm. It makes sense that they would choose to let them go because a chick and a duck aren’t animals suited for city living. This meme is both funny and sad, reminding audiences why these two cute mascots had to leave their owners.

The One With Friends On A Nutshell 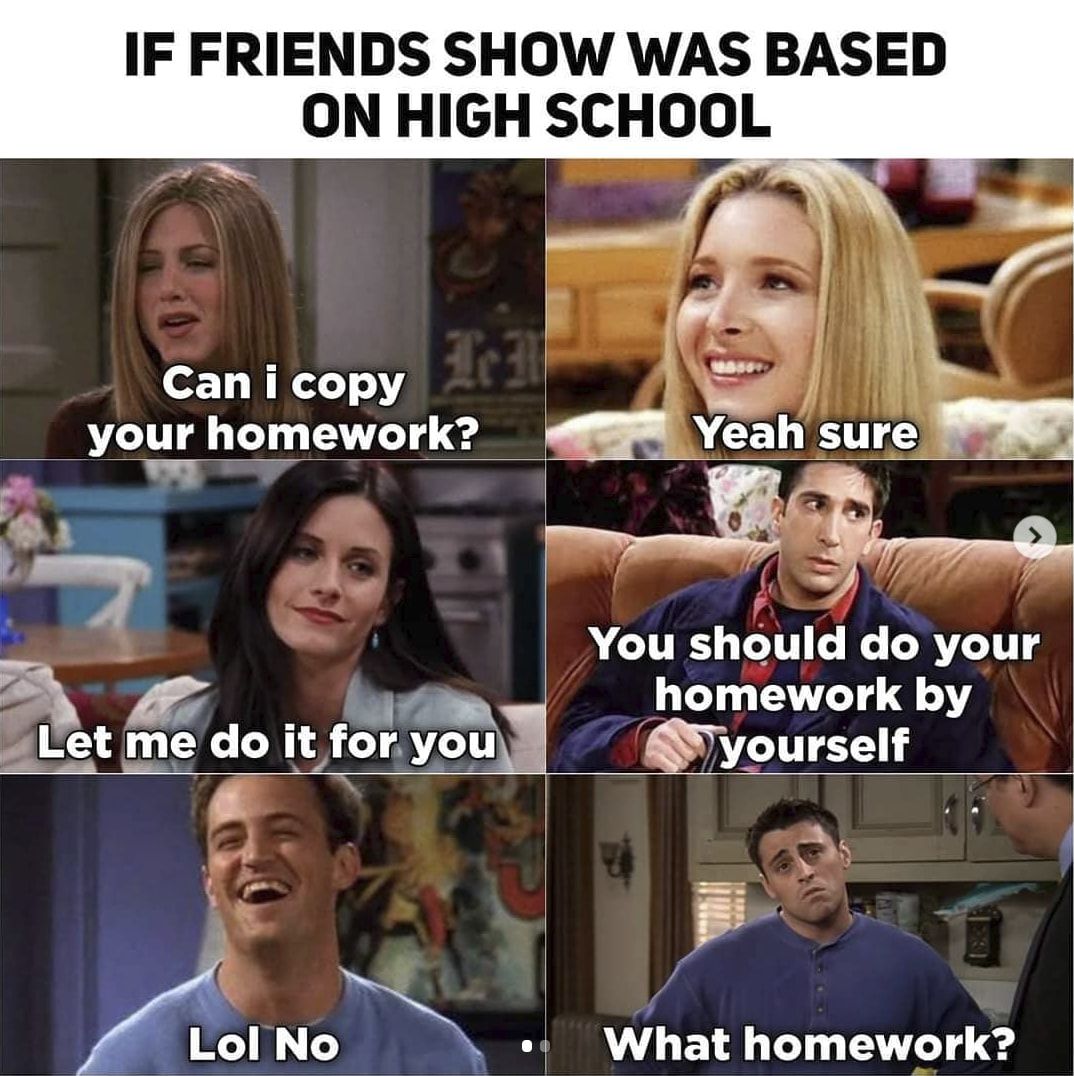 The cast of Friends had distinctive personalities that made them instant fan favorites. Each character was unique, making their connection feel more real and relatable. They had their differences and sometimes clashed because of their diverging points of view, but they never allowed those issues to get in the way of their friendship.

This meme is the perfect summarization of the character’s personalities. Rachel can forget things, Phoebe is the most laid-back, Monica will always be the best, Ross is by-the-book and petulant, Chandler has a joke for everything, and Joey sometimes doesn’t know what’s happening. It’s a brilliant and hilarious way to represent the show quickly and hilariously.

Best 18 Lord I Give You My Heart Chords

Best 14 Chords For Crimson And Clover